History of the Sisters of Charity of Cincinnati 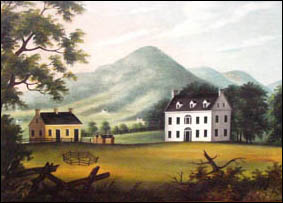 The Sisters of Charity of Cincinnati originated in Emmitsburg, Maryland where Elizabeth Seton founded the first community of women religious native to the United States in July 1809. These women devoted themselves to the education of children, care of orphans, the poor and the sick.

Shortly after its foundation the community began receiving requests from bishops around the country for sisters to serve in their dioceses. Such a request resulted in four Sisters of Charity arriving in Cincinnati, Ohio in October 1829 to open St. Peter’s school and orphanage for girls. This foundation was the first permanent establishment of a women’s religious community in the diocese of Cincinnati. By the late 1840s the number of sisters increased to 13 and the school and orphanage served a population of 300 young women.

At this time the sisters in Cincinnati learned that their superiors in Emmitsburg had arranged to affiliate their community with the French Daughters of Charity. Seven sisters, under the leadership of the local superior, Sister Margaret George, refused to participate in this change since they felt that it violated Elizabeth Seton’s vision for the community. With the encouragement and assistance of Archbishop John Purcell, they formed the diocesan community of the Sisters of Charity of Cincinnati March 25, 1852.

Within a few months their work expanded to include a boys’ orphanage and the first Catholic hospital in Cincinnati. They opened a novitiate, and as their numbers grew, expanded geographically. Their first mission outside Cincinnati was in Dayton, Ohio in 1857.

When the Civil War broke out, the sisters volunteered as nurses. Over one-third of the community, by then numbering more than 100, saw active service both on the eastern front in Ohio, Maryland and Virginia, and on the western front in Mississippi, Kentucky and Tennessee. Sister Anthony O’Connell became widely known as the “Angel of the Battlefield” due to her outstanding medical work as well as her dynamic personality.

Immediately following the war, four sisters went to Santa Fe to open St. Vincent’s, the first hospital in the New Mexico Territory. Other sisters soon followed as the work expanded to include an orphanage, industrial school for girls, care for the indigent poor and other social needs. The sisters supported themselves and their works by begging at the railroad and mining camps throughout the west. Soon other western missions were accepted until by the 1880s the community has sisters in cities and towns along the front range of the Rocky Mountains in Colorado and New Mexico. The most colorful and well-known of the sisters to serve in the west during the early period was S. Blandina Segale. Her letters and journals became the basis for a book, At the End of the Santa Fe Trail, and subsequently for articles, movies and plays. 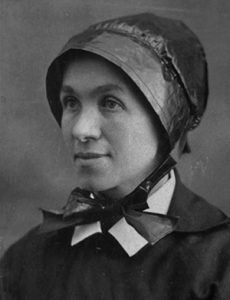 Meanwhile the sisters widened the expanse of their work in the Midwest. Many new parish schools were accepted in the Cincinnati area and throughout Ohio. The first sisters sent to Michigan in 1872 were the beginning of a long and substantial commitment by the congregation in that state. In Cincinnati, the hospital grew and became known as The Good Samaritan. What began there as a service to unwed mothers and their babies grew to become St. Joseph Infant and Maternity Home in 1873.

The community relocated its motherhouse in the 1880s when they purchased property in Delhi Township, as area west of Cincinnati. It was here that the present motherhouse, Mount St. Joseph, was build in stages over a 15 year period. This complex sits on a bluff overlooking the Ohio River and serves as the administrative, educational and retirement center for the community.

By the end of the nineteenth century the community became involved in work with Italian immigrants. The Santa Maria Italian Educational and Institutional Home was incorporated as the first Catholic settlement house in the United States and became the foundation for an Archdiocesan social services program.

As the scope of education expanded the Sisters of Charity responded. Beginning in the late nineteenth century, schools of nursing were opened in hospitals sponsored by the congregation. In the early twentieth century the community assumed responsibility for running a boarding school for deaf and hard of hearing students. The establishment of parish, diocesan and community sponsored high schools required the involvement of more and more sisters. In 1920 the College of Mount St. Joseph was founded to respond to the increasing demand for higher education for women.

In the 1920s the community decided to change its status from a diocesan to a papal community. This led to the adoption of new Constitutions and a change of habit.

China became the first Sister of Charity foreign mission. In 1928 six sisters arrived in Wuchang, a city about 750 miles up the Yangtze River from Shanghai. They opened a hospital and dispensary, cared for the aged and orphans, rang a school for young children and a training program for nurses. By the early 1930s young Chinese women began to join the community and in 1934 a novitiate was opened in China. The sisters worked through the Japanese invasion and occupation during World War II and the Chinese civil war but left in 1949 in the wake of the Communist takeover. Other foreign involvements include running an orphanage in Rome in the 1950s and 60s, missions in Peru from the 1960s to the 1990s, and a sojourn in Africa during the 1970s.

With the passing decades the community experienced continued growth. By 1925 there were nearly 1000 members; by 1951 the number had grown to 1300. By the end of the decade most sisters taught while other engaged in works such as health care and social services. Membership reached its highest at just over 1600 in the mid 1960s.

The change within the Catholic church resulting from the Second Vatican Council resulted in the community reassessing its ministry, lifestyle, sponsorship of institutions and internal governance. An Associate program, initiated in 1975, invites friend and co-workers to share in the mission of the community. That same year Elizabeth Seton was named the first American-born saint by the Catholic church.

In 1979 all Sister of Charity sponsored health care institutions were brought together in the Sisters of Charity Health Care Systems under the leadership of Sister Grace Marie Hiltz. This became one of the largest Catholic health care systems in the United States until it joined with other systems to form Catholic Health Initiative in the 1990s.

The Sisters of Charity of Cincinnati currently have 290 members. Besides traditional ministries of teaching, health care and social work, sisters are engaged throughout the United States in such works as parish ministry, administrative positions, hospital chaplaincies, work with senior citizens and with the poor. In addition the congregation sponsors grant and low-interest loan programs to assist community development and social justice organizations and projects.