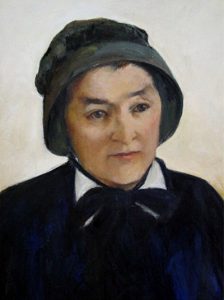 Margaret Farrell George was a founding member of the Sisters of Charity in the United States and a woman intimately involved in the growth of Catholicism in the United States. She conducted schools and orphanages in New York City, Frederick, Maryland, Richmond, Virginia, and Boston before becoming the founding mother of the Sisters of Charity of Cincinnati.

Born in Sligo, Ireland, December 27, 1787, when Margaret was six years old her family immigrated to the United States where they landed in Norfolk, Virginia. Within a short time her father, John, and her siblings died, probably in the 1794-95 yellow fever epidemic that claimed one fifth of that city’s population. Soon Margaret and her mother, Bridget Farrell, moved to Baltimore, Maryland.

Residing in a large, bustling port city afforded the maturing child many opportunities. Her formal education included French, history, and mathematics which she learned while attending a private school, probably Madame Lacombe’s academy. When she was nearly 20 she met Lucas George, newly arrived from New York City and a professor of the classics at St. Mary’s College. The two were married December 24, 1807 in St. Peter’s Pro-cathedral with Rev. William Dubourg, S.S., president of St. Mary’s College, presiding at the ceremony.

Within six months of the young couple’s wedding Lucas George was injured in an accident. A friendly wrestling match with one of his students left him an invalid for five months before his death November 2. During this ordeal Margaret was pregnant. She gave birth to a daughter within a few weeks of her husband’s death, but the baby succumbed to whooping cough in early January 1809.

During Margaret’s months of nursing her husband and carrying her unborn child, Elizabeth Seton arrived in Baltimore to open a school. The two became acquainted through their connection with the Sulpician priests at St. Mary’s, and it is likely that Elizabeth visited Margaret and supported her during this difficult period. As the two women came to know each other a life-long friendship developed.

In June 1809 Elizabeth Seton moved to Emmitsburg, a small village west of Baltimore, with her family and several women who became the nucleus of the American Sisters of Charity. The new religious congregation had its beginnings July 31, 1809 in St. Joseph’s valley where Elizabeth also continued her school. For the next several years Margaret remained in Baltimore with her mother, taught at a girls’ academy, and was involved in benevolent activities such as visiting the poor house. She retained close ties with Rev. William Dubourg as well as with Elizabeth Seton with whom she corresponded and, at least on one occasion, visited in Emmitsburg.

Margaret’s long-time friend and spiritual director Father Dubourg encouraged her to join the Sisters of Charity. On February 2, 1812, she and her mother Bridget Farrell traveled to St. Joseph’s in Emmitsburg, Margaret to join the Sisters of Charity, and Bridget, a widow of forty-seven, to board at the Motherhouse. Within a short time, Bridget Farrell, too, joined the community.

Since the community’s constitutions had recently been approved by Archbishop John Carroll, the first novitiate was about to begin, thus Margaret was among the first group of seventeen to make vows as Sisters of Charity July 19, 1813, after completing a 17-month period of living their rule and discerning their vocations.

Margaret’s skills as a leader and an administrator were immediately recognized and utilized both in the community where she served as Treasurer from 1813 to 1819, and in the school where she was appointed to teach history, bookkeeping, French, and penmanship.

By the end of the decade the Sisters of Charity had opened missions in Philadelphia and New York, and in May 1819 Margaret was named director of the New York Orphan Asylum. This was the beginning of more than four decades of educational and social work in various cities from the Atlantic coast to the midwest.

When Margaret left Emmitsburg she said good-by to Elizabeth Seton for the last time. The future saint had been in declining health for several years and finally succumbed to tuberculosis January 4, 1821. It was not until several months after Elizabeth’s death that Margaret returned to Emmitsburg to take charge of St. Joseph’s Academy for the next three years.

Her next assignment was to open a free school in nearby Frederick, Maryland. She and a second Sister arrived at their destination December 23, 1824 to find a two-room, sparsely furnished dwelling that was to be their home as well as the school they opened shortly after the first of the new year. Margaret directed this endeavor for the next nine years as it grew to encompass a large free school, an orphanage, and a boarding academy. It was during these years that Margaret formed a life-long friendship with Rev. John McElroy, S.J., the pastor of the St. John’s parish and later founder of Boston College.

From Frederick, Margaret was sent to Richmond, Virginia where she was again asked to open a new school. In Richmond, as in Frederick, she and her companions experienced anti-Catholic bigotry which Margaret noted in her journal with this entry: “Never in any period of my life, have I felt so completely isolated and a stranger far from friends and home.”

In 1837 Margaret was again elected Treasurer of the community, and in December of that year she returned to Emmitsburg to take up her duties. Her four-year stay at the Motherhouse signaled a crucial phase in the record-keeping of the community, for it was during this period that she compiled The Treasurer’s Book, “a list of all persons who have entered our Community from the commencement in Baltimore. . .,” and the Diary of St. Joseph’s, a charming and delightfully revealing journal filled with her personal observations as well as an account of every day life at the motherhouse and school. During the summer of 1841 Margaret was assigned to head the school and the orphan asylum operated by the Sisters of Charity in Boston. This mission had been started nearly a decade earlier and by the time of Margaret’s arrival served nearly four hundred children with more pouring in each year as increasing numbers of immigrants swelled the population of the city.

Margaret’s next assignment, in February 1845, took her to Cincinnati, Ohio, the “ Queen City of the West,” and a hub of the movement westward in the United States. Here Margaret took charge of St. Peter’s Orphan Asylum and School, a mission the Sisters of Charity opened in 1829. By the time of Margaret’s arrival, there were six sisters and more than two hundred children being cared for and educated at St. Peter’s.

By the summer after Margaret’s arrival, changes began to occur in the community. Rev. Louis Deluol, S.S., the Sisters’ superior, sent a directive instructing them to give up charge of boys’ asylums and schools. The immediate result of this change was the departure from the Community of a group of sisters in New York who formed a diocesan Sister of Charity community there.

Several years later, Rev. Deluol began preparations for the American Sisters of Charity to become members of the French Daughters of Charity. These arrangements, made by the superiors without consulting the Sisters, were announced to them in September, 1849 in a letter informing them that the union with the French community had been completed.

Margaret and some of the other sisters on the Cincinnati mission, after much agonizing, soul searching and discernment, expressed their reservations about this change to Archbishop John Purcell. They felt strongly that in order to remain true to the vision of Elizabeth Seton, they needed to remain an American community able to respond to the needs of the American church. When six sisters decided to leave the community rather than become Daughters of Charity Archbishop offered to support the establishment of a diocesan community of Sisters of Charity in Cincinnati. Thus, March 25, 1852, the Congregation of the Sisters of Charity of Cincinnati was established.

When the first elections were held in February 1853, Margaret George was elected Mother. Despite her sixty-five years, her wisdom, experience, enthusiasm, and drive attracted others and the community grew rapidly. Additional schools were opened in 1853 and 1854 and property was purchased for the first Motherhouse. Margaret oversaw much growth and change in the six years she served as mother. Besides the move of the motherhouse to a second location to accommodate the needs of the growing community and boarding academy, she welcomed five women from Newark, New Jersey, who participated in the Cincinnati novitiate in order to return to their home diocese to begin a new branch of Sisters of Charity.

In 1859 Margaret was elected Assistant Mother, and was assigned to St. Joseph’s Orphanage as superior, president, treasurer and bookkeeper. Here she oversaw nineteen sisters and about 350 orphans. It was here on February 2, 1862 that Margaret celebrated her Golden Jubilee as a Sister of Charity. A large assembly of sisters and orphans as well as the Archbishop feted this devoted follower of Elizabeth Seton and pioneer of the church.

Sadly, before the year was out Margaret suffered a stroke and was forced to give up her active life. On November 4, 1862 she returned to Mount St. Vincent Motherhouse, where for the next six years she was confined to an invalid chair. However, as one Sister recalled, “during her years of suffering . . . her gifts of heart and intellect were not permitted to lie dormant, but were used to the instruction of the young, either orally or by writing.” Pupils from the academy, seminarians, priests and, of course, the sisters visited her often and received her counsel.

Margaret died quietly November 12, 1868. In a letter describing the event, Mother Regina Mattingly wrote, “We all feel most sensibly her demise but know our loss is her gain for she has certainly made a most happy exchange. Fifty-seven years ago she gave her young heart to her God and faithfully has that noble heart labored in his holy service. . . . Pray that we her sorrowing children may like her be faithful unto the end.”

1787 – Born in Sligo, Ireland, to John and Bridget Farrell and immigrated with her family to the United States in 1793, initially settling in Norfolk, Virginia.
1795 – Moved with her mother to Baltimore after a yellow fever epidemic claimed the lives of her father and siblings. Lived in the Fell’s Point area and later near the Basilica of the Assumption in Baltimore City.
1807 – Married Lucas George, a professor of the classics at St. Mary’s College.
1808-1809 – Widowed in late 1808 and buried a newborn daughter in early 1809.
1809-1812 – Continued building a friendship she had established while Elizabeth Seton was in Baltimore by corresponding with her and visiting her in Emmitsburg. Taught in an academy and volunteered at the Baltimore Alms House.
1812 – Joined the Sisters of Charity in Emmitsburg and became part of the first novitiate; made vows July 19, 1813.
1812-1819 – Served as treasurer of the Sisters of Charity and as a teacher at St. Joseph’s Academy in Emmitsburg.
1819-1821 – Missioned as Sister Servant and Director of the New York Orphan Asylum.
1821-1824 – Returned to Emmitsburg as Director of St. Joseph’s Academy.
1824-1834 – Assigned as Sister Servant and Director of St. John’s Female Academy in Frederick, Maryland; also conducted a girls’ orphan asylum there.
1834-1937 – Named as Sister Servant and Director of St. Joseph’s School in Richmond, Virginia.
1837-1841 – Returned to Emmitsburg to again serve as treasurer of the Sisters of Charity.
1841-1845 – Headed St. Aloysius School and Asylum in Boston, Massachusetts.
1845 – Missioned to Cincinnati as Sister Servant and Director of St. Peter’s School and Asylum.
1852 – Led a group of Sisters of Charity in forming the diocesan Sisters of Charity of Cincinnati; elected first Mother of the community in 1853.
1859 – Elected Assistant Mother of the community and became director of St. Joseph Orphan Asylum in Cincinnati.
1862 – Celebrated Golden Jubilee as a Sister of Charity; suffered a debilitating stroke.
1868 – Died at Mount St. Vincent, Cedar Grove, in Cincinnati at age 80. 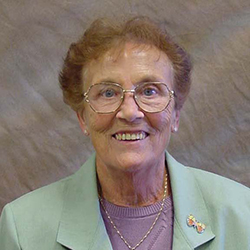 Erna Gray’s story of becoming an Associate of the Sisters of Charity of Cincinnati is as unique as Erna is herself. Read More.