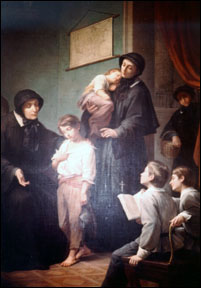 In 1808 Elizabeth Ann Bayley Seton, 34, was newly widowed with five children, newly poor, and newly Catholic in anti-Catholic New York. So when Rev. William Dubourg, a Sulpician and president of St. Mary’s College, invited her to open a girls’ school in Catholic Baltimore, Maryland, she welcomed the opportunity. Besides increasing numbers of students, others began joining her in what would be the beginnings of the American Sisters of Charity

The first newcomer, highly educated Cecilia O’Conway, was followed by Irish Maria Murphy, and by early June 1809 Susan Clossy and Mary Ann Butler. At Mass on the feast of Corpus Christi, 1809, these first Sisters of Charity appeared in simple black habits with white caps. Not long after, sister-in-law Cecilia; Rose White, a widow with a small son; and Kitty Mullen arrived.

With the Paca Street house now too small, a generous donation made property in Emmitsburg, forty miles west, their new destination where Sally and Ellen Thompson awaited them. By winter 1810 the house was once more too small to allow new members, but soon in the completed “White House,” they were welcomed again. Between March 1810 and February 1812, ten more were added. Under an adapted Rule of the French Daughters of Charity approved by Archbishop Carroll, a novitiate was completed, and seventeen women became the first vowed American Sisters of Charity July 19, 1813.

These first Sisters were characterized by maturity and independence. Some had never seen a religious sister, but the American pioneer spirit energized them. Whatever their expectations, they brought a wealth of good will and talents. 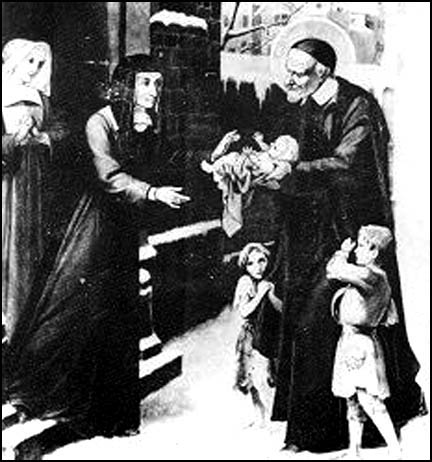 Forewarned, the community found rudimentary conditions, including shoveling snow from the garret, the bedroom with sleeping mats and only two cots for the infirm. Five preceded Elizabeth in death by 1821. For financial help sisters took in sewing from priests and students at nearby Mt. St. Mary’s until the boarding school stabilized income in 1810.

But fervor and vision inspired these women who followed Elizabeth, a charismatic leader who built a deep spiritual foundation on Mass and the sacraments, common prayer, and instructions. She cherished each individual as letters testify: “[she] has taken my soul in hand,” “one of the sweetest souls,” “lived in my very heart.”

Invoking the spirituality of St. Vincent de Paul, they sought to find God in every part of life and persons, especially in the poor, their first priority. Besides boarders in an academy, day students attended the Free School, and St. Joseph’s Class received orphans, with advanced instructions for the more talented. Sisters taught catechism and visited the poor and sick, helping from their slender supplies.

By 1813 St. Joseph’s was brimming with 18 Sisters, 32 paying boarders, and 7 others. But not all Sisters found this life nurturing. Several returned home or moved on to a cloistered life.

Once the Sisters accepted the charge of a Philadelphia orphanage in 1814, more applications came from around the country just as the members had. Wherever the swelling numbers of Catholics mustered resources for schools or asylums, Sisters of Charity were often asked for. In preference for serving the poor, they rejected several requests for a pay school. Often with the day schools, free schools were opened for them. Astutely, they drew up agreements with trustees to be able to manage the interior of the place ‘in their own way.” In Philadelphia an annual allotment of $36 a year for each Sister was “to remove the slightest suspicion of self-interest in collections” for the orphans.

Sisters begged alms at churches and then visited almshouses, the sick, and the indigent to help materially and also to assemble Catholics for receiving the sacraments.

Beginning in 1817 in New York, Sisters conducted an orphanage for which Pierre Toussaint, a slave and hairdresser, solicited funds from his wealthy clients. . By 1823 they even ventured into health care, and by 1830 Sisters worked in Baltimore, Frederick, Washington, D.C., Harrisburg, Albany, St. Louis, and Cincinnati. By the early 1840s over 60 Sisters staffed 10 institutions.

As Anti-Catholicism spread, they met it head on. Being called “female wolves” and “ferocious creatures” did not deter even Protestant parents who continued to enroll their children, and schools increased. Sisters were pelted with mud and had their property attacked in Charleston, and in 1834 in Boston they sheltered Ursuline Sisters fleeing from their burning convent.

Periodic cholera epidemics multiplied orphans, from 50 or 60 to 270 in Boston, for example. This also expanded into hospital work, to administering public hospitals in New Orleans and Philadelphia amidst horrifying conditions.

The death of Elizabeth Seton and other veteran members affected the new community, now so large that “½ hardly know the other ½,” wrote S. Margaret George.

As needs of the ever increasing Catholic population grew, bishops wanted to secure more Sisters, and a more attractive, controlling alternative to them was diocesan congregations.

By mid-century only three of the original vow group remained, Fanny Jordan in Emmitsburg, Elizabeth Boyle in New York, and Margaret George in Cincinnati. Exemplifying the original diversity, each had offered a lifetime of dedicated service to God’s poor. Each had passed on to future generations her special gifts as part of Elizabeth Seton’s founding circle.