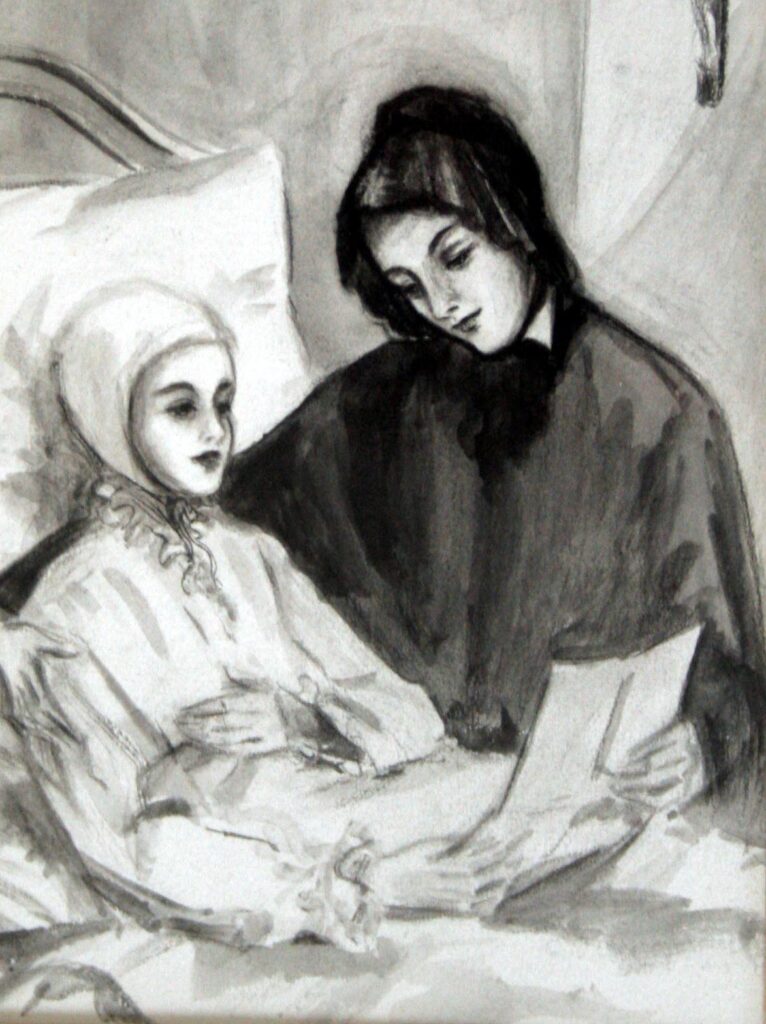 We continue to commemorate the 200th anniversary of Saint Elizabeth Ann Seton’s death this week looking at Elizabeth’s many attributes. In the following article, S. Judith Metz remembers Elizabeth as mother, a role she cherished.

From her earliest years Elizabeth Seton was attracted to the image of God as her father; later she grew to love Mary as her heavenly mother. These spiritual relationships proved to be models for her own parenting. Being a mother is a place where she met her grace in a most fulfilling way. She thrived on walking with her children through each step of their lives, yet she was able to release them to their own destinies blessed with her unconditional love.

Elizabeth clearly cherished her maternal role. She delighted in her children and devoted a great deal of energy and enthusiasm to caring for them in every step of their development. The young woman became the mother of five within seven and a half years of her marriage, and in her way of reckoning, each child was born to be treasured. Her oldest, Anna Maria, was from the beginning her companion and comfort. Two sons, William and Richard, followed. Both were sources of delight as well as concern to their mother as they sought to find their ways in the world. Catherine and Rebecca were the youngest, and to their doting mother, the brightest of the lot. From the start, Elizabeth’s children “wound themselves around her heart.”

When they were young she referred to them most frequently as her “angels.” Using affectionate nicknames, she effused over their small accomplishments in her correspondence. She describes how “there is as much kissing and admiring Ricksy as there used to be nursing him,” and how she was so taken with Catherine’s red locks and “saucy behavior” that she “could have ate her up.” She told her friend, Julia Scott, “My world is my family and all the change to me will be that I can devote myself unmolested to my treasure.”

The joy Elizabeth experienced in her family life was not without tension and anxiety, as she endured illness, the threat of epidemic disease, bankruptcy, and finally the death of her dear husband, William, just 10 years into their marriage. The turn of events left Elizabeth a single parent raising her children in severely reduced circumstances. Despite the challenges of their situation, Elizabeth looked back on this period in their “dear little humble dwelling” with delight “at the hours of love around [their] fire, or little table or at the piano, [their] little stories every evening, lively tunes, and thousand endearments after the lessons, and work of the day when each one helped [their] dear Mother.”

After the family’s move to Baltimore, Maryland, and with discussions of the formation of the Sisters of Charity, Elizabeth made clear her first priority when she wrote to a friend, “[F]or me, here I stand with hands and eyes both lifted, to wait the adorable Will – the only word I have to say to every question is, I am a Mother, whatever Providence awaits me consistent with that plea I say Amen to it.”

During her years in Emmitsburg, Maryland, as Mother of the Sisters of Charity, Elizabeth continued to nurture and support her children. She suffered untold anguish over the long illness and deaths from tuberculosis of her oldest and youngest daughters, Anna Maria and Rebecca. As her sons moved toward adulthood and set out on their own paths she never hesitated to support them in any way she could, despite setbacks and disappointments. And through it all she cherished the support and friendship of her dear Catherine. As she herself attested: “I am a Mother, whatever providence awaits me consistent with that plea I say Amen to it.”