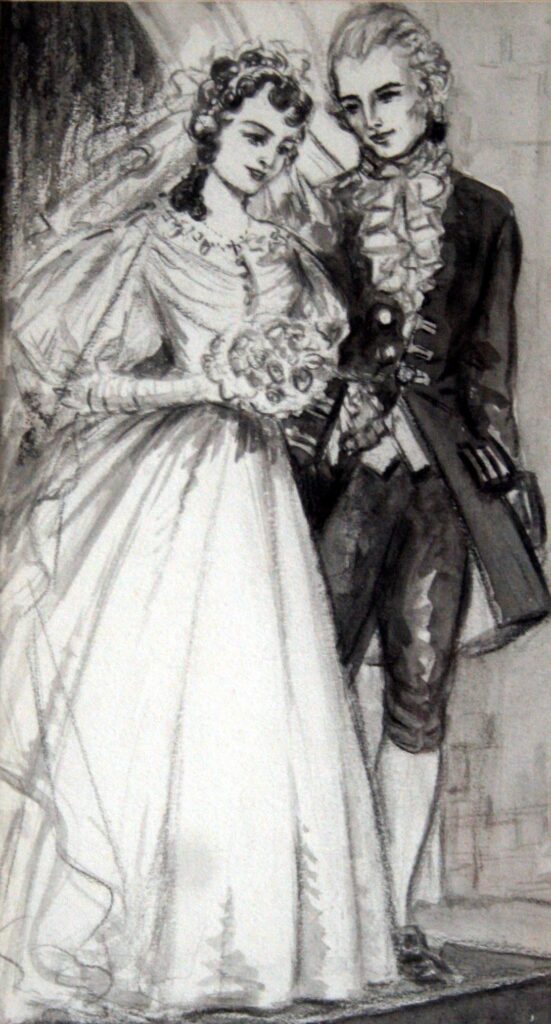 Drawing of Elizabeth and William Seton by S. Ruth Jonas.

We continue to commemorate the 200th anniversary of Saint Elizabeth Ann Seton’s death this week looking at Elizabeth’s many attributes. This final article, written by S. Judith Metz, remembers Elizabeth as wife.

“For better for worse, for richer for poorer, in sickness and in health.” These solemn vows professed between spouses at wedding ceremonies both inspire and challenge. In Elizabeth Bayley Seton’s case, they proved to be entirely prophetic of what her marriage to William Magee Seton would hold.

From its onset, the couple’s relationship was built on strong, affectionate love and firm friendship. Their notes and letters to each other speak of warmth and enthusiasm in their relationship. They are tender and endearing, as when Elizabeth addressed William as “my dearest treasure,” and he finished one of his letters with: “Adieu my darling and believe me ever your fond and affectionate husband.” On one of his business trips, Elizabeth enclosed a portrait of herself in William’s shaving case, to which he expressed his surprise, but avowed that she had “never been a moment from [his] thoughts.”

The “richer,” “better,” and “healthier” part of their marriage of nearly 10 years occurred in the early years. The couple enjoyed a lovely home in one of the most fashionable neighborhoods of New York; they enjoyed prosperity, and good health; and they enjoyed a rich social life and secure home environment. Sharing reading, conversation, music, and time with their much-loved children, Elizabeth’s descriptions of their family time together express her great joy and happiness in her home life.

Four years into this happy marriage, circumstances began to change. Added family responsibilities, business problems ultimately leading to bankruptcy, and William’s deteriorating health all combined to create difficult conditions for the Seton family. Elizabeth cheerfully accepted most of the responsibility for her husband’s dependent brothers and sisters when their father died. In fact, she nurtured her young Seton charges so lovingly that they formed strong bonds that lasted for the rest of Elizabeth’s life.

As business and health problems plagued her beloved William, Elizabeth rallied her own courageous spirit to support him in every way she could. Serving as her husband’s clerk, they labored on business accounts late into the nights. Elizabeth bravely received the Commissioner of Bankruptcy when he came to their door, while nursing her ailing and depressed husband as his strength was drained by the events swirling around him. William referred to his devoted wife as his “old knot of oak” as she worked to keep her family on an even keel through that turmoil that engulfed them. Buoyed by her faith and trust in God as well as the support of family and friends, Elizabeth proved her mettle.

Hoping against hope that a sea voyage could salvage William’s health, Elizabeth decided on a trip to Italy. After seven weeks at sea, they arrived in Livorno only to be quarantined in damp and stark quarters known as the lazaretto. If there could ever be any doubt of Elizabeth’s love and devotion to her husband, the testimony of their weeks of confinement recorded in her Italian Journal prove the extent of her commitment to her dying William. The tender care, the spiritual companionship and the spousal concern she rendered are poignantly portrayed on every page.

With selfless dedication, Elizabeth poured herself out, rendering every service as William lived out his final days and was laid to rest. “For better for worse, for richer for poorer, in sickness and in health, ‘til death do us part.”