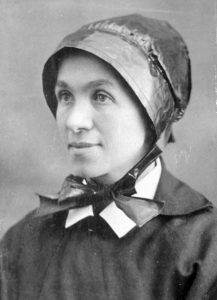 Maria Rosa Segale was born on Jan. 23, 1850, in Cicagna, Italy, a small mountain village near Genoa. Her father, Francesco, was an illiterate peasant, and her mother, Giovanna Malatesta, was a foundling. Following dreams for a better future, the family immigrated to the United States in 1854. Settling in Cincinnati, Ohio, where they joined others from their homeland, they experienced the extreme poverty and struggle of newly arrived immigrants. While her father began with a fruit stand that eventually grew into a produce store, Maria Rosa’s mother saw to their home and the education of the children. The young girl attended schools conducted by the Sisters of Notre Dame de Namur and the Sisters of Mercy. When she completed grammar school, Maria Rosa attended Mount St. Vincent Academy where she first met the Sisters of Charity of Cincinnati. She observed the Sisters’ work among the sick, orphans, and as Civil War nurses, and when she completed her courses at Mount St. Vincent, at the age of 16, on Sept. 13, 1866, she joined that Community and became known as Sister Blandina.

After spending several years teaching at schools in Ohio, the young Sister was sent, by herself, over the Santa Fe Trail in 1872 to Trinidad in the Colorado Territory. Here she was initiated into frontier life with all its adventures and dangers. Assigned to teach in the public school, she also had encounters with Billy the Kid and “frontier justice.” Stories abound of how she calmed mobs of armed men from taking the law into their own hands, helped criminals seek forgiveness from their victims, and even saved a man from a hanging party by facilitating reconciliation between him and the man he shot before he died. Sister’s adventures have been featured in novels, television programs, histories, and a comic book. In 1966 her story of bravery was told in a CBS series Death Valley Days episode, “The Fastest Nun in the West,” where she faced down the barrels of guns to find justice.

In 1877, Sister Blandina moved south to Santa Fe where her exciting activities continued in the schools, orphanage, and hospital the Sisters operated. She came to be known in every level of society from members of the state legislature to indigent patients at St. Vincent Hospital. After spending four years in Santa Fe, she went to Albuquerque where, besides her work of teaching, opened a Wayfarers’ House, became a defender of Native Americans and “Mexicans,” and went on begging trips to mining and railroad camps to raise money to support the Sisters’ missions. Later she returned to Trinidad, and spent a short time in Pueblo, Colorado. The memoir of her time in the Rockies is published as At the End of the Santa Fe Trail.

The intrepid Sister Blandina returned to Ohio in 1893, and four years later was sent, with her sister, Sister Justina Segale, “to see if they could do anything for the poor Italian [immigrants]” in the inner city of Cincinnati. Going to explore the conditions with only five dollars in their pocket, these two sisters founded and managed Santa Maria Institute, the first Catholic settlement house in the United States in 1897. They enlisted assistance from numerous sources and established services of every description to assist the poor and needy. In the process they visited the jails and charity wards in the hospitals and became involved in issues such as human trafficking and juvenile delinquency. An account of this work is told in a series of journals kept by Sister Justina, and in The Story of the Santa Maria Institute by Anna Minogue. In 1900, she returned to Albuquerque for two years to help start St. Joseph Hospital, known today as CHI St. Joseph’s Children, where poor children continue to receive early childhood services.

In 1933, at the age of 83, Sister Blandina retired to the Sisters of Charity Motherhouse. Here she prayed and maintained a lively correspondence with her many friends and acquaintances. She died on Feb. 23, 1941, just one month after celebrating her 91st birthday. Her ministries continue today, more than 100 years later.

The cause of her canonization as a saint in the Roman Catholic Church has been approved by the Vatican. This effort is being led by the board of St. Joseph’s Children in Albuquerque, New Mexico. Sister Blandina can now be called by her new title, Servant of God.

At the End of the Santa Fe Trail 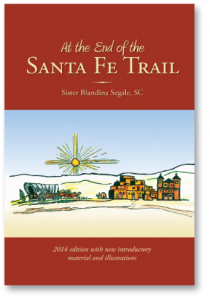 At the End of the Santa Fe Trail, a journal written by S. Blandina Segale to her sister, S. Justina Segale, recounts the lively experiences of S. Blandina on her mission in Colorado and New Mexico from 1872 to 1892. Reprinted in 2014 to include a new cover and introductory material to commemorate the approval of the cause for Sister’s canonization, the book is part of the saga of this colorful Sister of Charity who worked tirelessly for the poor and marginalized, advocated for women and children, cared for the sick and built orphanages, hospitals and schools.

Buy the Book on EBay or Amazon