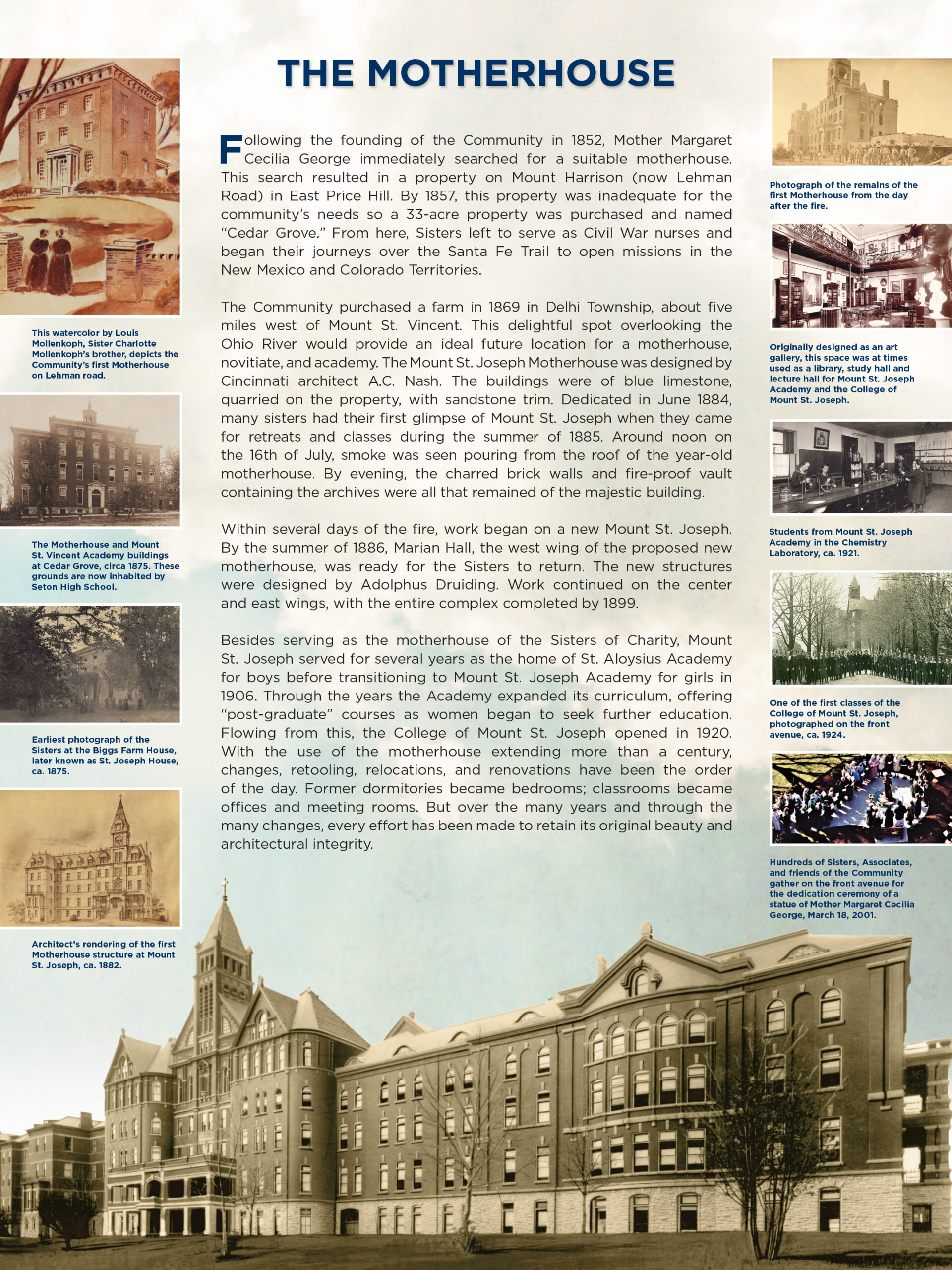 History of the Sisters of Charity Motherhouse

Tucked behind the Mount St. Joseph Motherhouse, along the rolling green hills and amongst large shaded trees, is the Mount St. Joseph cemetery. More than 1,700 Sisters are buried on the grounds; each year close to 20 more burials take place. The first grave, June 1883, was that of Mother Regina Mattingly. In 1909, a center circle was reserved for the graves of the original members of the Cincinnati Sisters of Charity; future Mothers were also buried here. At his own request, Bishop Thomas S. Byrne (a former chaplain for 18 years) was buried in the circle.

Re-organized in 1991 and brought up to award status by S. Giovanni Vastano in 1994, the Motherhouse Gift Shop was named the best in Cincinnati by the 18th annual Best and Worst Edition of Cincinnati Magazine. Today the Gift Shop, located on the south side of the first floor next to the Arts and Crafts Room, includes items such as rosaries, greeting cards, prayer cards, baby blankets, books and more. For more information contact 513-347-5758.

[NINE MUST-SEE SITES]
[NINE MUST-SEE STATUES]
The Motherhouse grounds are rich in beauty and history, the campus’ 75 acres providing ample spots for contemplation and intrigue. Come join us on a virtual tour as we explore nine such places and learn their stories.

[SEVEN MUST-SEE FEATURES]
Built in the shape of a Latin cross, this magnificent four-story chapel is a blend of Romanesque and Renaissance architecture. Vaulted ceilings coalesce to form a central dome, which is enhanced with a mural painted by Richard Bachman. The central dome contains a monstrance holding the Blessed Sacrament surrounded by four doctors of the Church who were devoted to the Blessed Sacrament. The sanctuary mural, depicting the Blessed Mother, was done by William Lambrecht.

The Community completed a substantial renovation of the chapel in 2000. A circular theme is carried out in a new octagonal altar which sits on a circular peninsula extending into the body of the chapel, a new baptismal font, and a semi-circular seating pattern using both new chairs and some of the original pews. The marble from the original altar was reconfigured and used in the baptismal font and in the base of the tabernacle.

This large room, directly across the hall from the chapel, was known as the Archbishop’s Room. The eastern section of the room was a bedroom where in case of inclement weather he would stay overnight. The western part was used as a vesting room for Mass and also for private conferences with the Archbishop. In 1984, after renovation, the room was renamed and used for receptions and to display panels depicting the history of the Community.

Located on the Motherhouse grounds, the Sisters of Charity dedicated its labyrinth on June 2, 2022. A labyrinth uses a defined path to assist the “pilgrim” in walking daily into the future. The Motherhouse labyrinth uses the same design as that of the Notre Dame Chapel in Chartres, France, which dates from 1221. the labyrinth is open to the public; please contact the Spirituality Center at 513-347-5449 for more information.

The building now known as Regina Hall was built around 1893. It is constructed of limestone, the same material used in the first Motherhouse which burned to the ground in 1885.

From its beginning, it was used as a laundry, answering the needs of a busy Motherhouse, Infirmary, Academy and College, before becoming the College’s Social Hall and art studio. In 1963, the College of Mount St. Joseph moved leaving Regina Hall for the Sisters’ use – parties, meetings, etc. The ground floor space was eventually converted into an apartment called “The Hermitage.” In 1985, the second floor of Regina Hall was remodeled and refurnished for a chaplain’s residence. In the past 16 years, it has housed a few chaplains and annually some visiting retreat directors.

The Rose Room is a gathering space for retreats, meetings and social events. Along with the adjoining hallway, it offers examples of art and artifacts either done by or associated with the ministries of the Sisters of Charity.

The Spirituality Center provides opportunities for spiritual enrichment to the Community through a wide variety of programs, offering weekend/overnight retreats, private retreats, days of reflection, evening prayer programs, massage therapy, and a labyrinth. The Center also provides individual spiritual direction for women and men. Motivated by the Sisters of Charity vision to share faith and resources, the mission of the Spirituality Center is to provide opportunities for growth by deepening faith life, strengthening efforts toward community building, reaching out to the needs of the community and heightening awareness of Gospel values.